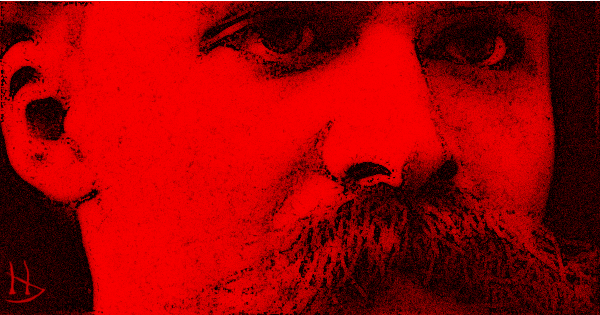 Why I Love Friedrich Nietzsche – A Greater Rationalist than Existentialist?

I guess people that know me and my passion for philosophy might question why I love Friedrich Nietzsche so much. Based on his initial premises, one can’t fault Nietzsche for reaching perfectly rational conclusions.

That’s probably what I love most about Nietzsche. His core philosophy is in direct opposition of Christ, as he stated so clearly in The Anti-Christ, yet it is more or less faultless once one agrees with God’s death that his Zarathustra so famously proclaimed.

Nietzsche is likely the greatest rational philosopher of all time. I don’t know. It’s not something I follow too much into the twentieth century.

Deep and simple are better than complex and shallow I guess and that’s another reason to love Nietzsche.

If one wishes to really discuss Nietzsche with me, I prefer discussing his metaphysics. I’m even more insistent on the topic if we are to discuss the validity or fault in his initial premise.

Nietzsche, of course, was savvy enough to claim a refusal to discuss or even consider metaphysics and possibly you will be the same, but to discuss the rationale for a belief in God, one can not really avoid discussing the theoretical existence of the supernatural.

Yet even Nietzsche had his metaphysical model of the universe, so his claim of metaphysical innocence was most apparently false. Nietzsche’s model even has a name – the Theory of Eternal Recurrence – and it even became the philosophical basis for the Oscillating Universe cosmological model.

With this theory, Nietzsche suggested that the finite was infinite. Doing so ran his theory head into the Arrow of Time (that is most certainly not a circle of time).

He knew enough not to suggest one could get something (the physical universe) from nothing (the Godlessness of a purely material universe), so he manufactured the entirely irrational and illogical idea of Eternal Recurrence.

A true existentialist might actually believe in the essential existence of the supernatural when logically considering the options and that is the rational reason that I believe in God – whatever you wish to call Him/Her/IT.