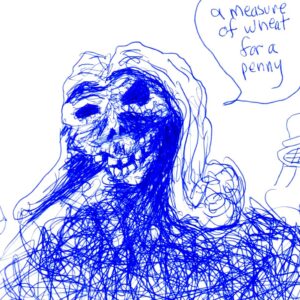 (The Roberts Court: Dissent of a Cancerous Finale to America)

Handed down to us through the ages has been the warnings of our prophets. That one day our judges will be so contemptible in their corruption and greed that they too will clearly signal that the end must be near.

This is where we find ourselves today, my fellow Americans.

How did we get here?

There is likely no better place to start this cursory review of the Roberts Court’s contempt than the election that ended up bringing John Roberts to the Supreme Court as Chief Justice.

In the contested 2000 US presidential election, the US Supreme Court took upon itself the role of political fixer. Not surprisingly, the ruling was in favor of the Republican George Bush. This same Bush – elected to an undisputed second term – would go on to appoint two more members of the highest court: Roberts and Samuel Alito.

Let us not forget that this decision came from a “Federalist” arm of our judicial system, and yet the decision struck directly against the right of Florida to handle the recounting of the ballots cast within its borders. This is a very simple view of the court’s decision, yet it is striking.

The precedent this court wished to establish certainly wasn’t something we might label anti-state’s rights by any measure. The real precedent, it seems, was for a court as a sort of “democratic mediator” between our two-party political system.

It doesn’t take an attorney to figure out more was being compromised here than state’s rights.

Rightly, this should be seen as a turning point in the highest court of the land.

We came to learn through the next several years that this Court was to take a very active role in overturning legislation made by both states and the federal government.

This is rightly been called an activist bench with a decidedly political bent. This is exactly what those who have appointed Thomas, Alito, Roberts, Gorsuch, Kavanaugh and Barrett have expected from these justices. They should not be disappointed as they are getting exactly what they have implanted into our judicial system.

Yet as American citizens, and thereby the last line of defense against authoritarianism, we must see things differently.

Be it a disease or a poison, the corruption that pumps through this formerly august body is ultimately, in the end, lethal. Judicial objectivity is simply lost in the court’s politization. The courts very purpose hasn’t simply been compromised, it has been hijacked for the purposes of advancing a political agenda.

The court, very apparently, would no longer be a mediating valve between our executive and legislative branches, but would hike up its robes to wallow into this muck itself.

This was and is the morbidity of a system put in place to ensure checks and balances of power. What the founders of our country wished to secure was the power of democracy and of the “people”. The Roberts court has had other ideas.

Instead of protecting the constitution, we see a court destined to pour the acid of corruption through a system already diseased by the forces of capital. The end result would be exactly what America’s founders wished to avoid – outright tyranny.

Faced with the novelty of our advanced technology, the Roberts court has followed a trajectory of dismantling the critical rights protecting us from unreasonable search and seizure (for Constitution fans, this is known as the Fourth Amendment). First, there came the automobile and today we have smart technologies and facial recognition.

Nowhere do we see the courts actually protecting these freedoms. Indeed, faced with the novelties of our postmodern technological reality, they have systematically dismantled these critical freedoms and enabled a panoply of injustices to spread throughout law enforcement and the judicial system.

These various blows to American freedom seemed to have culminated with the Roberts Court’s refusal in 2008 to hear ACLU v NSA and that would have ruled on the constitutionality of the NSAs unwarranted wiretapping of US citizens.

This must be seen, in the light of day at any rate, as the ultimate expression of legal precedence in direct opposition of the spirit of the fourth amendment. This was a stunning unconstitutional deathblow to an already battered fourth amendment.

One can only deduce that the Supreme Court either fails to recognize the central importance of these protections to a free society or they simply lack the will to protect these rights.

Personally, I suspect the latter. These judges aren’t idiots even if their rulings smack of populist dribble and the distinctive stench of Mammon.

It gets worse. The civil rights movement of the late 1950s and early 1960s culminated with the 1964 Voting Rights Act. In its 2013 ruling of Shelby County vs Holder, the court eviscerated these protections. As that venerable paragon of judicial excellence Ruth Bader Ginsburg famously stated, “throwing out preclearance when it has worked and is continuing to work to stop discriminatory changes is like throwing away your umbrella in a rainstorm because you are not getting wet.”

Today we can see the results of this failure to protect our democracy. Now there are unusually aggressive forms of voter suppression. Even worse, we have the outright subversion of democracy in states led by those wishing to push for an authoritarian and anti-democratic agenda.

Are there any realistic hopes that a Supreme Court created to protect our state from these anti-democratic machinations will actually put a halt to this insidiousness?

It is likely that no ruling the Roberts court has made is more egregious to our constitution than the landmark Citizens United v FEC ruling of 2010. Finally, it seems, this court reached a conclusion. What we once called the American Republic was to quietly devolve into an oligarchy or more specifically something called a plutocracy – rule by the wealthy.

It is important to note though, that this decision didn’t emerge from a vacuum, but could only have been reached after a fairly thorough erosion of the judicial body. This was a corruption that mirrored the disease coursing within our legislative branch with our lawgivers steeped in the power and influence of money – most specifically corporate wealth.

In a real sense, our government has been taken over by a stateless phenomenon we call corporate power.

With Citizens United, the court has equated money with speech. In so doing, “We the People” has been displaced by “We the Money”.

Justice Stevens’ eloquent dissent included the lines, “A democracy cannot function effectively when its constituent members believe laws are being bought and sold.”

The sanctity of our Republic is in the hands of the very ones who are enriched by the monetization of our political system – our elected officials. It is up to them to do something like pass a constitutional amendment. Yet, one must ask, why would they wish to protect our democratic institutions from their own greed and avarice?

The answers are like what has been revealed in the numerous examples of how our capitalist institutions pursue profits and wealth over any other consideration. Most recently, this is the Facebook whistleblower who pointed out that the executives of this powerful monopoly (allowed to thrive with this phantasm called our post-Reagan antitrust law enforcement) are neither malevolent nor evil. Yet, they knowingly perpetuated heinous evil destined to destroy our democratic foundations in the singular pursuit of profits and wealth.

America will remain a bastion of capitalism and a center of wealth in an increasingly impoverished world. At what cost, you might ask? The answer is simple: your freedom.

In large part, we can thank the Roberts Court for this.