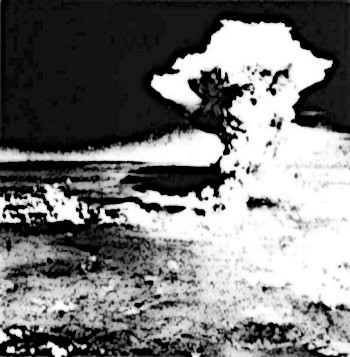 The end is near.

The end of this world is coming soon.

Is this ending the harbinger of a new, more just and equitable emancipation of humanity or simply the end?

American and, indeed, world leadership has brought us to this point. Is that any surprise?

If you actually are surprised, you most likely need to go back and get schooled.

On August 6, 1945 (75 years ago) the United States dropped the atomic bomb on the Japanese city of Hiroshima. Three days later, a second bomb exploded over Nagasaki.

This Reality, more than any other, made it evident that we had all officially entered into the post-modern era. Humanity now has the ability to extinguish all human life on the earth.

Post-modernity, more than anything else, asks what Truth is – if there is even such a thing. Foucault’s great insight was that this thing that we call Reality is really a manifestation of power.

Excepting for those who have truly managed to remain outside of our society – hermits, serial killers, itinerants and mendicants – Americans are all products of a violent, white-supremist patriarchy. Every one of us.

Our leaders are also products of this society. Indeed, it is our leaders and our experts who have worked so diligently to get us here and keep us here.

Human history is really about over 6000 years of the relationship between the few masters and the great masses that must be called slaves. Power follows wealth, but power is what is monolithic, not Reality. Remember Foucault.

To continue down this path of leadership and power, we must resign ourselves to the extinction of the human species.

Take a good, hard look at who or what it is that we are actually looking at here.

Let me help you….

This then is a Reality that can not be dismissed for long. This Reality transcends this world and comes to us courtesy of powers both of this world and likely straight from the transcendent itself.

Your leaders and your experts have brought you here. So why do you continue to ask them to appear on Meet the Press and Face the Nation? Why even tune in anymore?

It may be time to drop that LSD-25 into the reservoir. It certainly is a time for Legends and for Heroes. It’s time to stop the Empire, destroy the Death Star and take back our planet.

It is too late for reform. We’re running out of time. All we have is Revolution.

Let’s do a bit of a reassessment since we are so in need of a little Electroconvulsive Therapy. We need to change the way we think. Remember, all of us, everyone of us in this society, is a product of the violent, white supremist patriarchy.

We need to get in touch with our feelings. We need to experience the transcendent. We need to quit being such selfish bastards.

So, let’s get off our collective asses. It’s time to act and act together. We have a real common cause and this simply must be the unifying issue that it is. This is political, but it’s a human issue and not a matter of conventional politics. This is a moral imperative and while it is like so many of the moral choices we must each individually make every day, it also has earth-shaking significance. It is the time of Legends and of Heroes. It is the time when “every-man” and “every-woman” must rise to the heroic. Which side will you be on? So, either get out of our way or join the march. We’re going to bring these walls down and find a more humble and humanitarian life before its too late. Too late for us and too late for our children. What will your legacy be? How are you to lead the rest of your life?